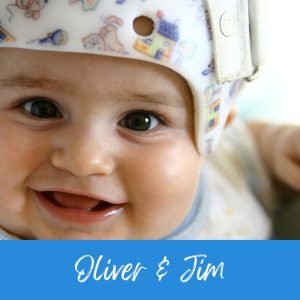 When baby Oliver came into the world, he was a happy baby who had a lot of challenges to face. Born with significant medical issues, including a brain malformation, the inability to swallow and an underdeveloped head shape, he spent his first two months in the NICU. His parents relinquished care and when Oliver was released from the hospital, he was placed in foster care.

When CASA Jim stepped into Oliver’s life – he didn’t even have a name. Known at that time as “Baby Boy”, Oliver had a lot of uncertainty in his life.  His medical and developmental issues were overwhelming and likely to be life-long.  He was living with a great foster family who was able to temporarily care for him, but there was no long-term home on the horizon.

Jim was the stability that this little one needed. He was appointed Oliver’s developmental decision maker, meaning he was able to “stand in the shoes of the parents” to make sure that Oliver got the care he needed. Jim immediately got to work to connect Oliver with Regional Center for early intervention services and helped advocate for him to receive a head-shaping helmet to support his development. While progress was being made, Oliver’s team – including Jim – were still concerned about finding a life-long home for him.

And then, Oliver found the home he had been waiting for.  A family stepped forward and as Jim described it, “it doesn’t get any better than them”.  The foster mother is a trained nurse, able to navigate Oliver’s complex needs and a large extended family were ready to support Oliver’s care.  Jim described it as a “wow” moment – when Oliver came to live with them, the family told Jim, “we love this boy, he’s already part of our family”.

Jim continued his advocacy, now with strong partners by his side. Jim advocated for Regional Center services to transfer to where the foster family lived, ensuring limited disruption in Oliver’s critical early intervention services. He supported the foster parents as they balanced the many, many medical appointments and services that Oliver needed.

And best of all, Jim was able to share with the Marin Juvenile Court that he wholeheartedly supported Oliver being adopted by his loving foster family.  In October 2022, the family and Jim celebrated Oliver’s adoption into his life-long home.

As for Jim, his advocacy and heart did not go unnoticed. Jim was awarded as the 2021 Center for Volunteer and Nonprofit Leadership’s Volunteer of the Year.